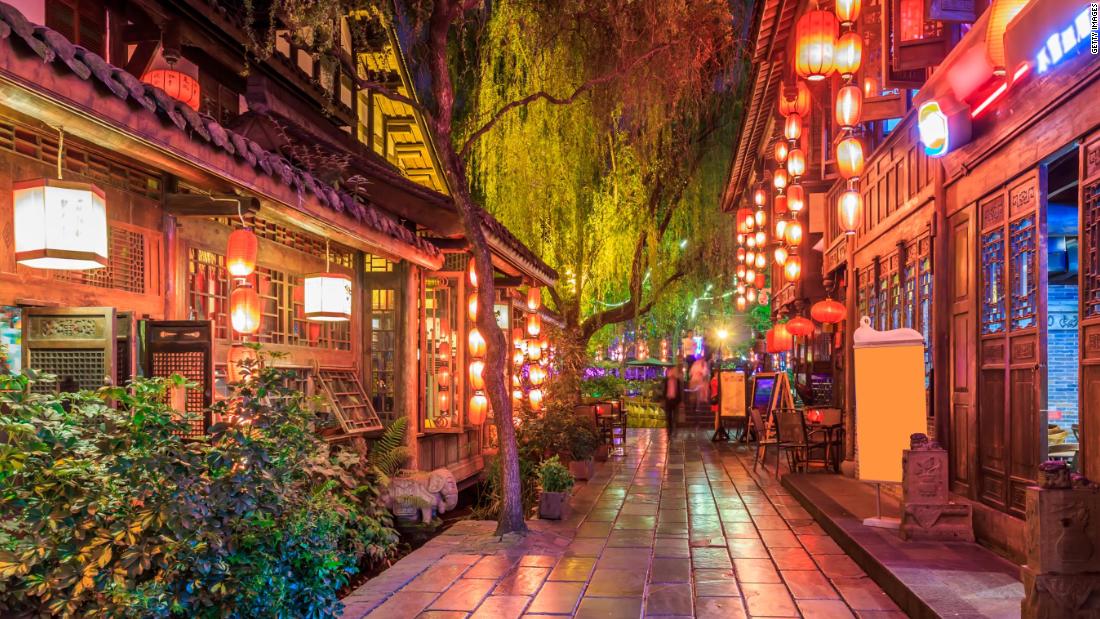 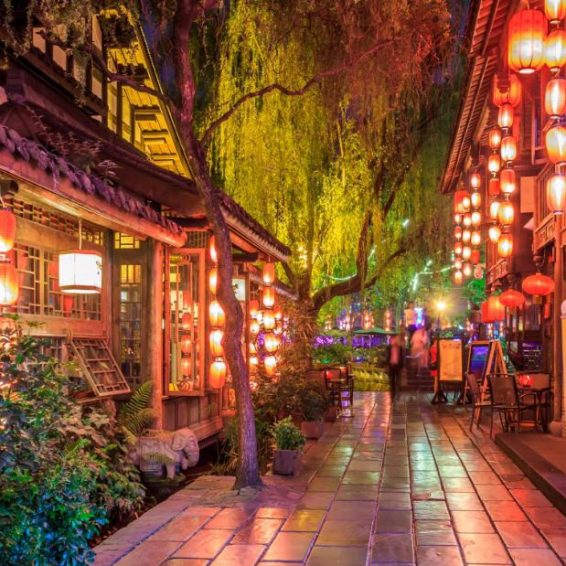 (CNN) — While China still hasn’t announced solid plans to reopen its border to international leisure travelers, there’s no harm in starting to dream about your next visit now.

There are hundreds of worthy destinations in the country catering to all tastes. Appearing arguably at the top of that list is Chengdu, the capital of southwestern Sichuan province and the perfect jumping off point for those in search of a mix of stunning natural scenery, wildlife — it’s the panda capital of the world, of course — and some of the most incredible food on the planet.

In recent years the city has expanded its offerings, which include a number of new projects tourists will want to experience — including a flashy new international airport and several architecture marvels.

Whether you’re traveling for business or just dreaming about post-pandemic travel, here are nine reasons Chengdu should be part of your itinerary when China reopens to the world.

It’s the happiest city in China

Chengdu has been voted the happiest city in China for 12 consecutive years.

If visiting a place with happy locals is a priority for you, there’s no better city to hit than Chengdu.

Chengdu has been voted the happiest city in China for 12 consecutive years by an annual survey conducted by Oriental Outlook, a Shanghai-based magazine affiliated with state news agency Xinhua.

The survey results combine big data, questionnaires, site visits and expert opinions and take into account everything from income and medical services to the standards of city living.

Which Christmas markets are still going ahead?

Chengdu’s pandas are getting a cool new home

The new Panda Pavilion at the Chengdu Research Base of Giant Panda Breeding will open early next year.

The home of Chengdu’s most adorable residents and biggest attraction — the pandas — is getting a major upgrade.

Opening in early 2022, the new Panda Pavilions at the Chengdu Research Base of Giant Panda Breeding are a collection of ring-shaped buildings nestled within the facilities.

“We are extremely impressed with the natural environment of the site, surrounded by undulating hills and covered with dense green lush woods,” says Ping Jiang, the mastermind behind the Panda Pavilions and design principal of Atelier Ping Jiang / EID Arch, during an interview with CNN Travel about his visit to the site.

The cedar-clad, light-filled spaces are “inspired by the natural landscape of Chengdu’s prairies” and “an animal-friendly environment.”

The Panda Pavilions house the bears’ indoor and outdoor activity spaces and living quarters, along with staff administrative offices and supporting facilities.

It’s got one most beautiful bookstores in China

Shanghai-based Architecture Studio X+Living is known for building some of the most beautiful bookstores in China and their latest opening in Chengdu is no exception.

The new location in Dujiangyan, the northwestern part of Chengdu, is the second Zhongshuge bookstore in the provincial capital. The first, which opened in 2017 in central Chengdu, is modeled after terrace fields.

Inspired by Dujiangyan’s ancient irrigation system — the oldest of its kind in the world — the new whimsical bookshop features meandering floor-to-ceiling walnut bookshelves and high and low arches.

The mirrored ceiling makes the hallways look like a kaleidoscope.

“Dujiangyan is a city with flowing landscapes. The magnificent dam project and the magnificent mountains and waters have become the cultural landscape that I want to express in Zhongshuge,” X+Living’s founder and chief designer, Li Xiang, tells CNN Travel.

“I hope that the beautiful environment of the bookstore can attract more people who do not love books, and awaken their interest and memory in reading.”

Opened earlier in 2021, Tianfu International Airport is one of the largest new airports in China.

One of the world’s most eye-catching new airports, Chengdu’s Tianfu International Airport is as modern as it gets.

Beginning operations in 2021, Tianfu International Airport is the largest civil airport to open as part of the country’s 13th Five-Year Plan (2016-2020).

With a total of six runways (only three have been completed as part of its first phase), the mega airport is expected to handle up to 60 million passengers per year by 2025.

Travelers can experience an array of cutting-edge technologies at Tianfu, including facial recognition software, self-check-in kiosks and AI robot concierges.

The shopping and dining options are incredible, too.

The first-ever city to be certified as a City of Gastronomy by UNESCO in 2010, Chengdu’s gastronomic prowess is undeniable.

So much so that Michelin is set to add Chengdu as its fourth city guide in mainland China after Shanghai, Guangzhou and Beijing, with a guide due to come out in 2022, according to a post on the Michelin’s official Weibo channel.

Many flock to the capital city of Sichuan for the tongue-numbing spicy hotpots but the now famous mapo tofu comes from here too. The addictive dish of minced meat and diced tofu in spicy chili and fermented broad bean oil is said to have been invented in Chengdu more than a century ago.

Two other must-haves include smoked duck with sweet, crispy skin and savory meat, and tofa — a silky and sweet tofu pudding with various toppings.

The arts scene is taking off

Since the founding of the Blue Roof Artistic Center in 2003, a disbanded artists’ quarter, the city has transformed into the art and culture capital of China’s southwestern region.

Some of the most internationally renowned contemporary Chinese artists, like Zhou Chunya and Zhang Xiaogang, now have studios in Chengdu.

This year, Chengdu’s art scene will get another major boost.

The 400,000-square-meter Tianfu Art Park, an art-themed urban park in central Chengdu, will open with two new museums: the Chengdu Tianfu Art Museum and the Chengdu Museum of Contemporary Art.

Both operated by the Chengdu Art Academy, the Tianfu Art Museum will focus on local arts whereas the Chengdu Museum of Contemporary Art will emphasize international forward-thinking work and promote the global development of Chengdu’s art scene.

Kicking off the openings of these events is the Chengdu Biennale (on from now to April 6, 2022), which takes place within the park and inside the two museums.

The city comes alive after dark

Chengdu’s vibrant nightlife is one of its biggest attractions.

In a recent study by the Trip.com Group, Chengdu was named one of the 10 most popular nighttime travel destinations in China. It has the second highest number of bars in China — just behind Shanghai.

But there’s more to the city’s nightlife than its famous pub crawls, live music venuesand nightclubs.

The residents of Chengdu also appreciate a quiet night out at a local teahouse in an alley, sipping hot drinks and playing cards while watching Sichuan operas.

It’s a window to ancient China

The pretty Jinli Street is a 550-meter pedestrian road.

Chengdu may only have been on the international radar for about a decade or two, but it’s been a prosperous city for over 2,000 years. Fun fact: It claims to be the only city in China that hasn’t changed its name for about 2,300 years.

To travel back in time to ancient China, visitors should head to Sino Ocean Taikoo Li. Smack in the heart of the city, it’s multi-use commercial and retail complex centered around the 1,400-year-old Daci Temple.

Many of the historic buildings’ grey bricks and tiled roofs have been restored while contemporary low-rise architecture naturally blends in with the surroundings.

And then there’s, Bitieshi, a beautifully restored Qing Dynasty (1644-1912) courtyard house set inside the Temple House, a boutique hotel that pays tribute to the area’s rich history.

For some classic flavors, the recently opened Jinli Ancient Street is a 550-meter pedestrian road filled with shops selling snacks.

With a history that dates back 2,000 years, it was modeled after architecture from the Qing Dynasty.

It’s also a city focused on the future

There are plans to turn Chengdu into a “Western China Science City” — namely a leading demonstration area for innovation and entrepreneurship in China, according to a government statement.

Travelers visiting the “Science City” can expect to see many examples of eco-conscious and avant-garde architecture created by some of the most renowned firms in the world.

Among these is the world’s first “Unicorn Island,” a Zaha Hadid-designed complex dedicated to incubating the country’s next high-tech unicorns — privately held start-up companies valued at over $1 billion.

There will also be a low-carbon Future Science and Technology City, created by the Office for Metropolitan Architecture and Gerkan, Marg & Partners (GMP). Part of the grand Science City plan, the high-tech city will boast an aviation academy, educational complexes, laboratories and a business center for innovative companies.

After you’ve marveled at the modern architecture, take a ride on Chengdu’s fully-automated Metro Line 9 and see stations created by J&A and Sepanta Design, or ride the futuristic glass-bottom panda sky train.

Zhongtang Air Railway, the latter, debuted back in June. The train, painted to resemble a panda, has a see-thru bottom and offers 270-degree visibility (the top is not transparent).