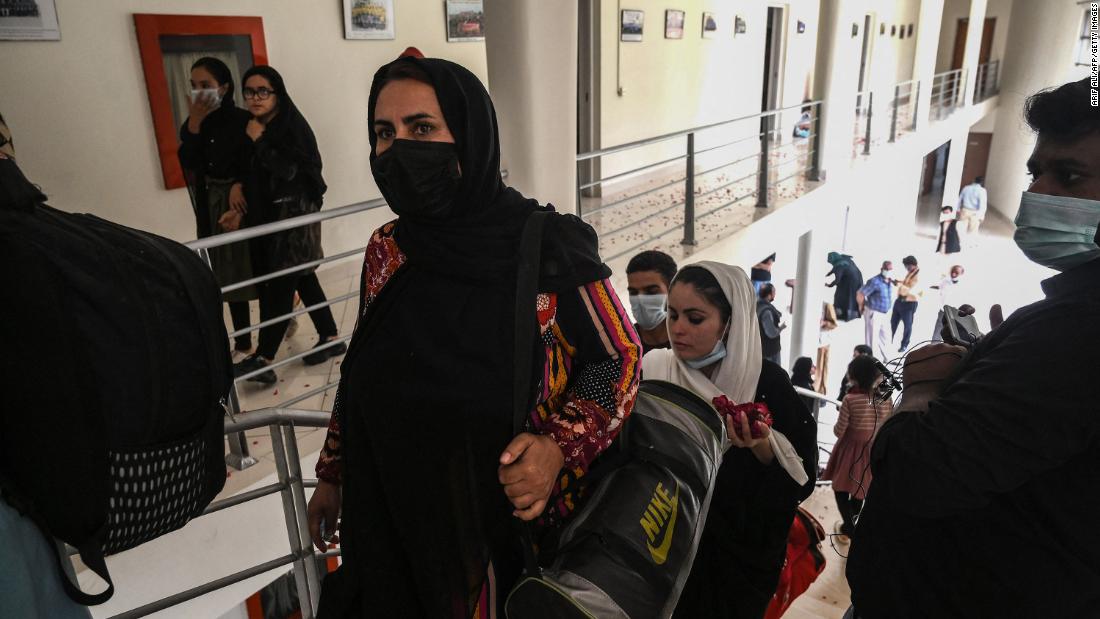 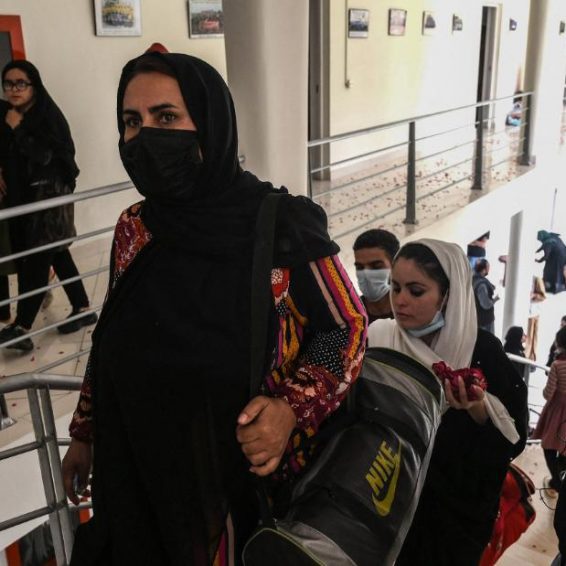 Safe and alive, but ‘traumatized,’ the future of these Afghan women athletes is very uncertain

2 months ago·7 min read
ShareTweetPinShare
Home
World News
Safe and alive, but ‘traumatized,’ the future of these Afghan women athletes is very uncertain
The content originally appeared on: CNN
When the Taliban seized control in mid-August as the United States and Western allies withdrew their forces, women and girls were quickly instructed to stay home from work and school, and hundreds of the country’s athletes went into hiding or sought to be evacuated from the country fearing reprisals.
During the last period of Taliban rule, women were banned from participating in sports, and by late August, Khalida Popal, the former captain of the Afghan women’s soccer team, had urged players to delete social media profiles and burn their kits to protect themselves.
“They are like a nightmare for my generation. They took over all of our country in one night. And after that night, we were able to see the Taliban on the streets. They were cruel. They didn’t have mercy for anyone,” 19-year-old defender Narges Mayeli told CNN.
Mayeli is one of two Afghan women footballers now living in the UK who spoke to CNN about their experiences.
Read More
Once the Taliban seized power, the women feared for their lives and the safety of their families.
An attempt to board an evacuation flight to Qatar failed in August following a suicide attack at Kabul airport, so the young women scrambled to leave Afghanistan overland, via Pakistan, through the Torkham border, in mid-September. They eventually secured a flight to the UK in November after two precarious months.
“I feel sad and worried, and I want to be able to go back to my home. We never dreamt of leaving our country, but it’s very difficult and scary knowing that as women, we lost our light, our freedom that we had in Afghanistan,” Sabreyah Nowrozi, the 24-year-old team captain of the women’s team, told CNN.
In August, the UK government announced a resettlement scheme for Afghan citizens facing “threats of persecution from the Taliban.”
The scheme, which prioritizes women, girls, and religious and other minorities, will see the UK take in up to 20,000 refugees over the next five years, and grant indefinite rights to stay in the country or pursue citizenship.
But the women’s football team has been given no assurances, Copenhagen-based Popal, who spearheaded efforts to evacuate the women and girls, who only have six-month temporary visas, told CNN.
“These girls have no refugee status,” Popal, who lives in Denmark after she was forced to flee her home country in 2011 in fear for her life because of her role in establishing Afghanistan’s national women’s team, said. “They are in kind of a limbo of not knowing what will happen to them in six months’ time,” she said.

The United Kingdom’s stance on immigration has hardened in recent years: Home Secretary Priti Patel has repeatedly vowed to make the English Channel crossing to the UK from France “unviable” for migrants.
Last Wednesday, 27 people — including a pregnant woman — drowned in bitterly cold waters off the coast of France after an inflatable boat carrying migrants bound for Britain capsized in the English Channel.
Thousands of refugees and migrants fleeing conflict, persecution and poverty in the world’s poorest or war-torn countries risk the dangerous crossing, often in dinghies unfit for the voyage and at the mercy of people smugglers, seeking asylum or economic opportunities in Britain.
Ministers from both sides of the Channel on Thursday laid blame on their counterparts after Wednesday’s tragedy, which was one of the largest losses of life in the English Channel in recent years. It is unclear whether Afghans are among those who perished, but the route is one that other Afghans have used in the past.
The Afghan women players say they feel safer and more secure now they have reached the UK. “Now we can have a calm sleep, we are less worried,” Mayeli said.
But without the guarantee of refugee status, the young women say they feel insecure.
“Of course, you cannot focus on studying, you cannot focus on integrating, knowing that maybe tomorrow you will be kicked out of the country,” Popal said.
Nowrozi told CNN: “It’s worrying for me that after six months the UK could say, go back to Afghanistan.”
“These girls, these families, the entire group have been through a lot. Their life was in great danger. They have lost a lot,” Popal told CNN.
“They didn’t want to leave Afghanistan, but they were forced to. They were pushed to. They have lost so many things on the way. They were scared of their lives,” Popal said.
“It was not only the fear from losing their life by the Taliban, but it was from the neighborhood, from the society that were against the participation of women, especially through football,” she said. And it wasn’t just the girls in danger, according to Popal: “The brothers, and some of the fathers were threatened, beaten.
“And there, some of them, they lost their homes. They were put on fire because the minute the Taliban took over the country, those ideologies were supported by [the] Taliban.”
The UK granted the group six months of leave to facilitate their entry to the UK, according to a Home Office official.
They will be processed for Indefinite Leave to Remain (ILR) in the UK before their six months of initial leave expires, in line with the government’s standard approach during and since the evacuation, according to the official.
If they are granted ILR, there will be no time limit on their ability to stay in the UK.

The future of women’s sport

The future of women’s sport in Afghanistan remains unclear.
Ahmadullah Wasiq, deputy head of the Taliban’s cultural commission, told Australia’s SBS News that Afghan women should not play cricket and other sports in which they would be “exposed.”
“In cricket, they might face a situation where their face and body will not be covered. Islam does not allow women to be seen like this,” Wasiq said to SBS News.
The chairman of the Afghanistan Cricket Board, Azizullah Fazli, later told Al Jazeera that Taliban officials had indicated there was “officially no ban on women’s sport,” but many remain concerned.
Popal told CNN that the Taliban was sharing inaccurate information about the status of women to seem more progressive to the international community.
“I have been receiving a lot of phone calls, messages, emails: people are desperate, especially the women athletes. They are really trying to just find a way to get out, to feel freedom, to get access to education,” Popal said.
In October, CNN spoke to women in Kabul who were returning to public spaces after staying inside during the initial first few uncertain weeks of Taliban rule.
Still, there has been concern about a steady rollback of women’s freedoms since the group seized power three months ago, most recently with women barred from appearing in television dramas.
“We started playing football in a small area in a community where all of the people know us as football players. We were the women who were playing football, not only as a game, but we were playing football in order to empower other girls in order to raise our voices for women rights,” Mayeli told CNN.
“As a woman, as a football player, I didn’t feel safe in Afghanistan.”

An opportunity — but not “endgame”

The young women say they are hopeful for their “bright futures” in the UK.
Mayeli said she is thankful to all of the people who worked to help her reach the UK, including the UK government, Popal, ROKIT (a UK-based charity that has helped the footballers) and Kim Kardashian.
“I want to have higher education, and help other people as I can. As I have abilities, I wanna raise my voice for other girls, because they’re still in Afghanistan and they are in danger,” she said.
Popal told CNN that the girls need to be given refugee status, education support, mental health and financial support.
“The main focus in the beginning is to get them mental health support, because they are traumatized. They need special care, and they have been on the go for such a long time now,” she said.
“They have done their job. They have been through a lot, and they have risked their life to get out of Afghanistan. They have shown leadership. They have shown bravery. We need the community to come together to support the team to achieve their dreams and goals.”
Nowrozi told CNN that she wants to become a child psychologist, as she studied psychology at university in Afghanistan. And the players can’t wait to carry on playing football.
“To play for Chelsea, it’s my ambition.”
“I love it, because when I’m playing football, I feel free. I feel relaxed. At first, it was a hobby, but after that it became my love,” she said.